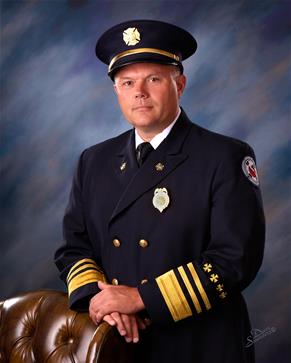 Ward, a lifelong resident of Fairfield County, came to the department after a graduating from Ohio University - Athens with a degree from the College of Business, and working in the private sector for a period of years. He was hired by the Lancaster Fire Department in 1989 as a firefighter and paramedic, promoted to the rank of Lieutenant in 1998 and to the rank of Captain in September of 2001. From September of 2001 until March of 2007 he was the captain of Crew 1, at which time he was promoted to the rank of Assistant Fire Chief. While holding the position of Assistant Chief, his responsibilities encompassed every facet of the operation including: facilities management, apparatus acquisitions and maintenance, fire prevention, arson investigation, community fire safety education, budgetary responsibilities and personnel.

Chief Ward is active in Lancaster in many areas. He attends Maple Street United Methodist Church and has served on various committees. Additionally, he is an active member in Rotary and served as a board member for one term and assists in scholarship review committee. Ward has also been involved with the Fairfield Medical Center’s Community Advisory Committee.

The City of Lancaster has a long and distinguished history and Chief Ward feels very blessed to lead one of the finest fire departments in Ohio, serving one of Ohio’s finest communities