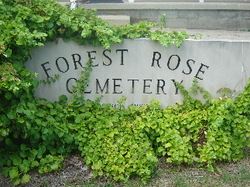 Several other older cemeteries around Lancaster were also moved to Forest Rose Cemetery due to development. Shortly after the cemetery was formed, the German Lutheran Cemetery that was located at the northwest corner of Mulberry Street and Forest Rose Avenue was moved there. Also, around 1907, part of the Old City/Lancaster Burial Ground (also known as the Old Methodist Cemetery) was moved to Forest Rose cemetery from it's previous location near the corner of High Street and Chestnut Street.